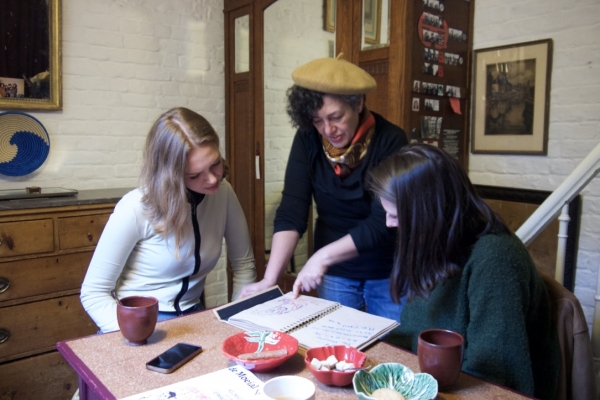 “A lot of people didn’t want to pay to go to the bathroom, so I had to find an alternative”

Cristina Cerqueira, the lady responsible for keeping bathrooms clean, is known as Beursschouwburg’s ‘Madame Pipi’. It happens quite often that visitors of the multidisciplinary art center use their last pennies to buy that last drink of the night and won’t have any more left when they desperately need to use the bathroom. Madame Pipi has found a way to help these people out.

It’s a rainy day in Brussels when we meet the lovely Cristina Cerqueira. She invites us to her home, a little wooden house located behind a bio shop. She offers us tea and biscuits. Cristina tells us she is used to getting interviewed by now and shows us films that art students have made about her. Eagerly she starts telling her story to us as her cat, Celestine, watches our every move sternly through the window.

Cristina: “I started working as ‘madame pipi’ at Beursschouwburg in 2009 and in 2012 I developed this project. Because at that time we had a new director, and he was very laid back, he basically told me I could do what I wanted. At the same time there were a lot of people who didn’t want to pay to go to the bathroom, so I had to find an alternative.”

Does that happen often, people not wanting to pay?

“Oh yes it does happen a lot. And without wanting to generalize, more often than not Flemish people are the most willing to pay. I find myself having longer conversations with French speaking people to convince them to pay. But mostly it’s the younger crowd that comes to the pop and rap nights that doesn’t have a lot of money to spare. When the nights are directed to an older audience, almost everyone pays without problem. So it was mainly a problem with the students.”

“Some people even draw portraits of me, this one I like in particular”
© Jan Meeus

“That is why my idea took so well. A lot of visitors of the Beursschouwburg are art students, because in Brussels there are so many art schools. That’s how I now have a collection of very nice drawings next to some less beautiful ones.”

Why don’t you just let people who don’t want to pay not go to the bathroom?

“I can’t do that. The concerts used to be in the basement, but even back then if it was a free night, when you go outside, you have to stand in line all over again. Plus, it also ruins the vibe of the evening if you have to go outside to find a bathroom. Now that the nights are all the way on the top floor people even go the bathroom on the staircases to avoid going back downstairs. Mostly drunk people or people that are under the influence of course. I also don’t want to keep asking the partying people to pay and ruin their experience.”

Do people sometimes offer you something else they have on them?

“Yes once actually, a long time ago. A very beautiful girl put her silver necklace around my neck because she didn’t have any money, she insisted that I keep it. About half an hour later a young man came to ask it back, he had given it to her as a present. I had the impression he was very in love with her but she didn’t feel the same way so she didn’t really value the necklace.”

“Other people sometimes offered to dance or sing for me, that’s how I got the idea of having them draw for me, so I could look at it again.”

How did you end up working at Beursschouwburg?

“I studied to be a primary teacher in Portugal and worked for three years. But I wanted to work with my hands so I joined friends in Belgium who were opening a bio shop. I also worked in a restaurant and now I cook as caterer for the shop. Since it’s not a highly paid job I also work at Beursschouwburg on the weekends. Over there I’m a freelancer: all the money I receive, I get to keep. My employers are very nice to me, they pay the taxi I take when I get off work, which is usually around five in the morning. They invite me to all of their events and I was allowed to do the expositions of the drawings at Beursschouwburg.”

“Some cut images out of the magazines I have and make nice collages. Others just write something.”
© Jan Meeus

“Because I have another job and a house I can afford to let people draw instead of paying for the bathroom. there are still a lot of people who don’t want to fuss around and just pay. It also makes it more fun for me.”

How did people react the first time you told them they could draw you something instead of paying?

“They were all for it, immediately happy with the option. I don’t tell everybody that it’s an option up front. Of course I would prefer them to pay but some people already know about it. In Belgium and certainly in Brussels people are very participative and enthusiastic, I don’t think that back in Lisbon I would have had the same reactions.”

“I’ve got notebooks full of drawings now. For my first exposition in the bathrooms I recycled a lot of cardboard from wine-boxes and used those to make collages. Now I buy a lot of material for people to draw on.”

Cristina goes upstairs to get her little books full of drawings and proudly shows us pictures taken at her previous expositions.

Did people come and look at their own drawings?

“Oh yes, everybody was looking for their own drawing, some spend hours looking through the little books just to show me they too had once drawn one.”

“Cristina’s cat, Celestine, watches our every move sternly through the window.”
© Jan Meeus

“I used to have a polaroid camera and I took pictures of the bands and artists, some never realised I was the ‘madame pipi’. Maybe it was because they were very drunk or maybe because I drew on their faces and they thought that was my job. This singer (points in the book) wrote down his lyrics. Some people even draw portraits of me. Others cut images out of the magazines I have and make nice collages. Some just write something.”

We read things like ‘Merci Beursschouwburg!’, ‘I really got to pee right now.’, ‘When I fuck, I think about you.’ And ‘Faire pipi c’est de se connaître soi-même.’

“Loads of people came to my second exposition, it was only one night and so many people were interested in the event. I even had a projection of a selection of drawings I made and left one wall blank so people could draw on it. My next aim is to publish a book of selections of drawings. I would like that very much.” 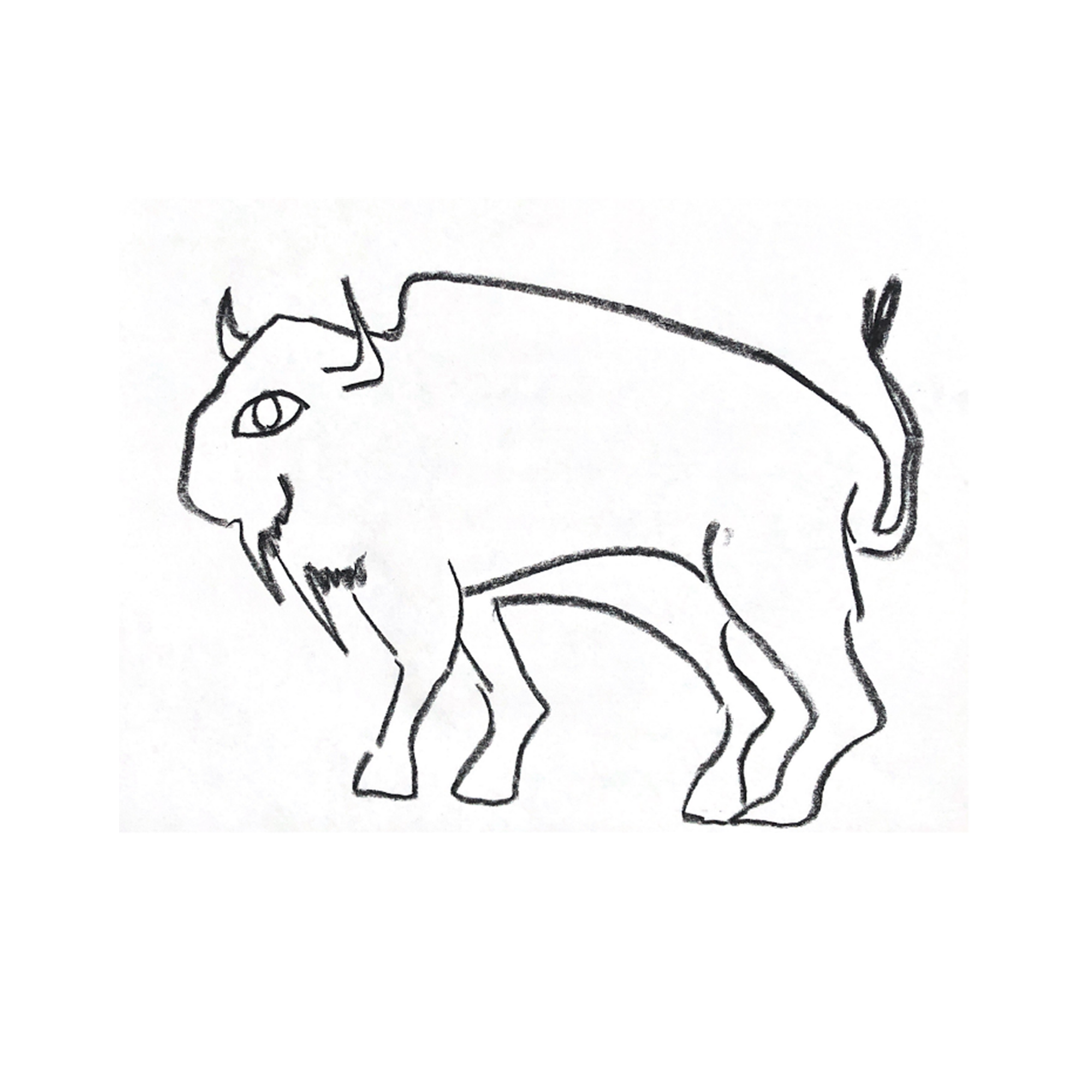 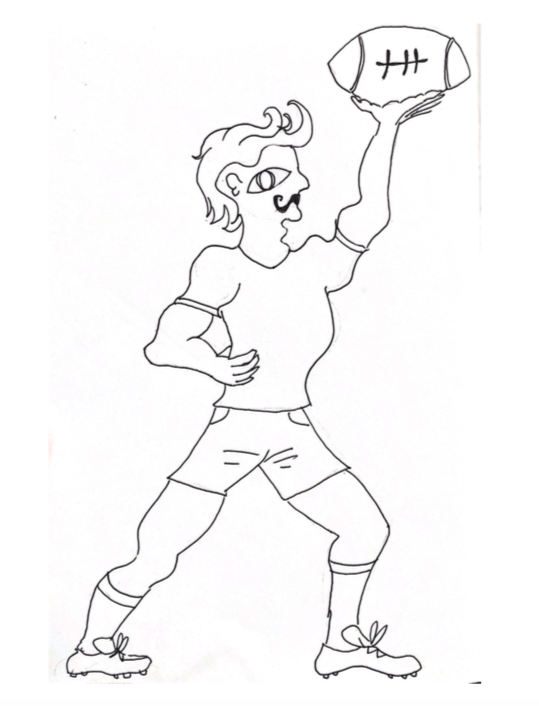 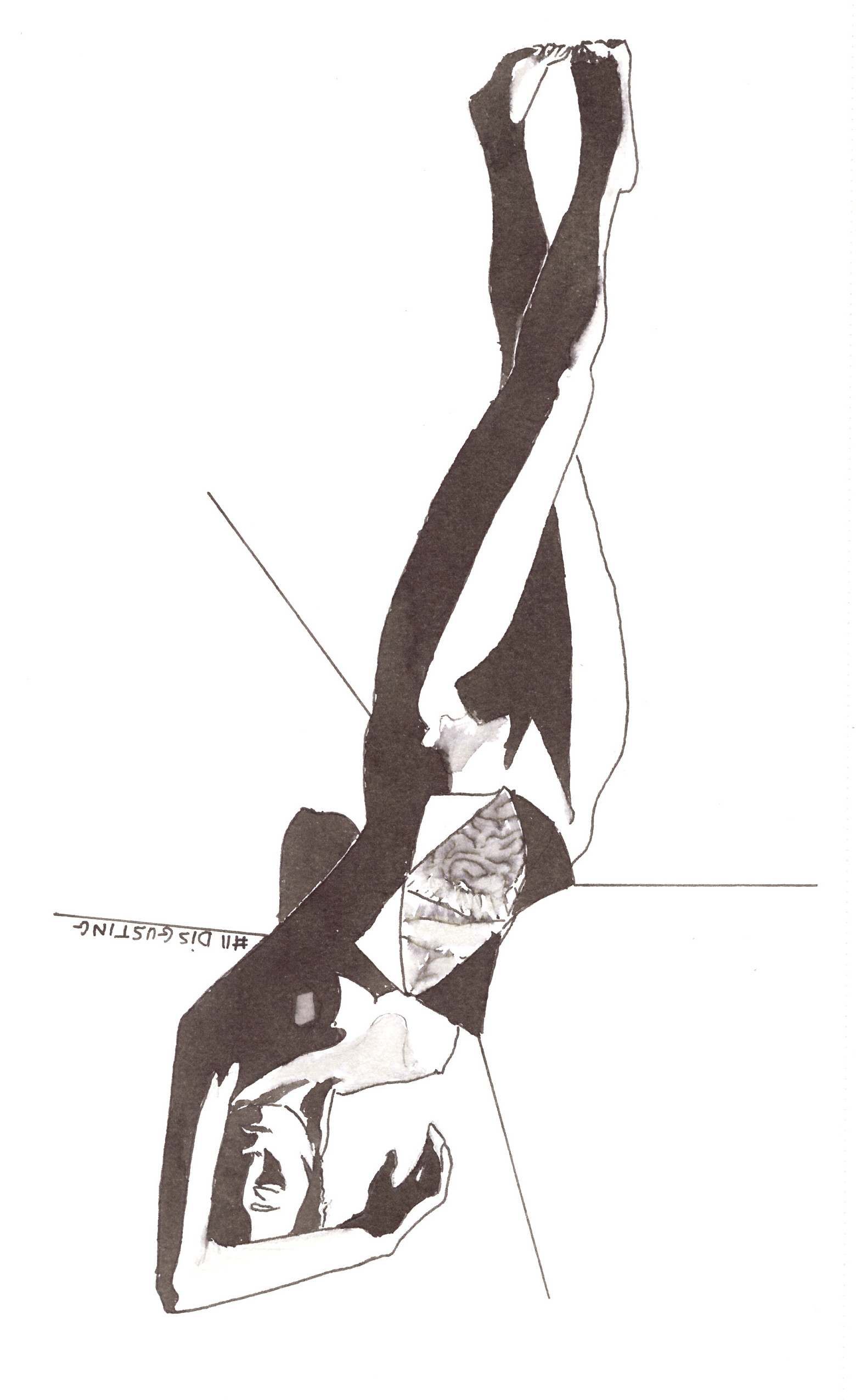